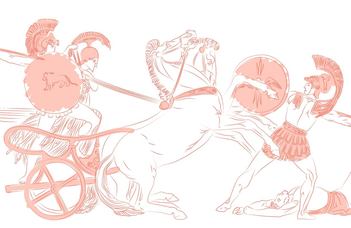 cordially invites you to a lecture by

Classicism and the Quest for Homer: Alexander Pope and John Flaxman

The eighteenth-century rediscovery of Homer inspired two English ‘translations’ of the Iliad which were both enormously popular and influential beyond their place of origin. Alexander Pope’s translation of the Iliad (1715–1720) into rhyming couplets and John Flaxman’s engraved outline drawings (1793) represent two starkly different approaches to making Homer present. They were produced on either side of the revolution in taste and in the understanding of Greek antiquity inaugurated by Johann Joachim Winckelmann (1717–1768). August Wilhelm Schlegel remarked that Flaxman had made a ‘backtranslation from Pope’s travesty to the genuinely Greek and heroic’. But Flaxman’s outlines are each accompanied by a quotation from Pope’s translation which reframes Pope’s poetry for a different aesthetic purpose. In this paper I will consider the different approaches to the ‘simplicity’, ‘nobility’ and antiquity of Homer that these ‘translations’ pursue and the questions about classicism and its media that they raise.

We use “cookies” on the website to provide the best user experience to our visitors in addition to secure browsing. You can change your cookie settings at any time in your browser settings. More information