Unity and Inconsistency in Flavian Epic 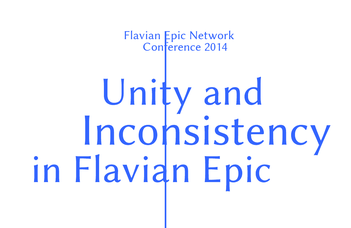 Unity has been an important principle of aesthetics and literary criticism from Plato, Aristotle and Horace in antiquity (and especially in their 18—19th c. reception) to theoretical movements like Russian formalism and New Criticism in the 20th century. Although some post-structuralist theories have questioned it, and although epic as a genre always, to some extent, resisted it, insistence on the aesthetic integrity and coherence of any literary text has influenced – and continues to influence – most activities of classical philologists from textual criticism to literary interpretation and constructing the canons of Greek and Roman literary history.

Flavian epics have often been criticized, among other reasons, precisely for not being simplex et unum: for their lack of perfect coherence and their apparent episodic character. The "Flavian revival" has brought with it a greater sensitivity for inconsistency as an aesthetic phenomenon as well, and led to re-interpretations of individual passages, but no general study has been published about the subject. James O'Hara's recent investigation of Inconsistency in Roman epic (2006), however, is doubly interesting from our point of view: first, because it shows the presence of inconsistency as a poetic strategy in the Roman epic tradition which the Flavian epics joined; and second, because it stops with a short chapter on Lucan. The aim of our conference is, then, to continue this work and discuss issues of unity and inconsistency in the field of Flavian epic.

The conference program in pdf is available here.

We use “cookies” on the website to provide the best user experience to our visitors in addition to secure browsing. You can change your cookie settings at any time in your browser settings. More information